2016 is going to go down as a big year for VMware.  This marks the year where we saw a real pivot away from the Hypervisor and towards being a hypervisor and cloud provider agnostic cloud management platform company.

VMware have the leading Cloud Management Platform today (according to IDC market share figures) with vRealize, and the Private Cloud market is one that is growing.  From my new vantage point in EMC I am seeing a lot of the world’s biggest companies, that have huge IT infrastructures, starting to adopt Private Cloud as a way of transforming their IT operations.

However, the growth of Private Cloud is nowhere near close the adoption of Public Cloud, especially the adoption of Amazon AWS, Microsoft Azure and Google GCS which is still accelerating today.

2016 marks the year where VMware withdrew from their seemingly held ‘King Canute’ position of trying to hold back the tide and have instead developed a strategy to embrace public cloud adoption by making it easier and safer, or in Pats terms to give businesses the ‘Freedom and Control’ to adopt public cloud in a manageable fashion. 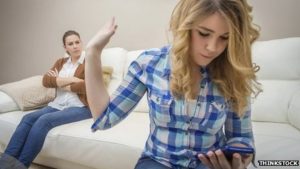 His anecdote about the traditional IT department still being responsible for IT services if they run in the Public Cloud, despite having very little control over them, struck a chord with many.  He analogised Public Cloud adoption by the business as entering its difficult teenage years, where the tension between freedom and control is most prevalent.  His aim for VMwares new solution ‘VMware Cross-Cloud Architecture’ is to enable enterprise public cloud adoption in such a way that it is akin to a teenager you both love AND like.  It went down well with the audience and there were some great demos of the NSX and Arkin technologies making a three tier app run in AWS in Ireland, migrating the database tier to an on premise cloud and cloning the web and app tiers to another AWS region.  More impressively into a new Azure hosted instance so the application was striped across geo-zones and providers – fantastic stuff.

In my opinion this 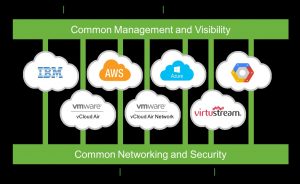 is the logical progression of the SDDC (software defined data centre) concept from the software layer that straddles all the on premise data centre components to make it a flexible, easy to consume resource pool, to now straddling across data centres, where your on premise private and public hosted clouds become part of a single logical data centre fabric, with a single control plane to execute and manage holistically across each island of infrastructure resource.

VMware Cross-Cloud connect is currently in tech preview with a tentative release date of this quarter I believe.  More information can be found here:

Another announcement that was well received was VMware Cloud Foundation – a new way of making Private Cloud easier by automating the installation, updates and day 2 operations of a VMware Cloud management platform.  From a customer perspective this means a much shorter time to value for their private cloud projects and for the SI’s and partners an opportunity to refocus away from physical build tasks and onto more value add activities such as integration with key business process like ITIL Service Management tools and existing build engines.  It also makes it far easier for vCloud Air partners to stand up a public cloud offering.

It will be interesting to see how we take advantage of it at EMC for the Enterprise Hybrid Cloud product, Chad Sakac the VCE CEO has written a piece on it here which describes how it will simplify EHC product upgrades in future:

The day 2 key note moved its focus towards the End user compute and MDM initially, demoing the capability to publish a catalogue of approved applications across a multitude of different devices.  Key to this was the identity and security piece which allows single sign on across locally delivered and SaaS based applications in a seamless (to the end user) experience.

My own experience on the customer side tells me that this is going to be a big hit.  Managing access and authentication along with managing the application life cycle – deploy, update, remove etc is getting more and more complex with the adoption of SaaS as a new standard consumption model for many new line of business applications.

Not wanting to name names but one company I worked for never quite got around to deploying an intelligent SSO tool that could act as a single point of control for federating Active Directory users to SaaS based applications. Primarily because the project to deliver a single app didn’t have the budget to deliver a SSO solution, so we ended up with bits of direct AD authentication for local apps, some SAML for others, oAuth for others, excel exports of user accounts to be copied to a SaaS provider and the ongoing headache to keep them updated as people join, leave, change jobs. 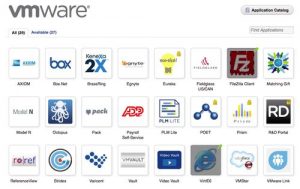 VMware Horizon provides a solution to manage your applications and end points holistically regardless of whether you use Apple, Android or Windows devices and regardless of whether your apps are locally installed on your PC, virtualised as an app instance or a desktop, SaaS based or otherwise, all with a single identity engine to control access – awesome!  Users that adopt this are undoubtedly going to see operational effort to manage plummet, agility to adopt and deliver new applications soar and best of all ensure the right people have access to the right apps and data which can only increase security.

There were also sessions on NSX and VSAN where the story was that these products are in the ‘Tornado’ phase and that adoption is ramping up massively.  NSX revenue is taking off and the number of customers referenced on the slide decks was growing.  It was interesting to see a former employer on the bottom right of the slide deck being referenced which was great – I got the ball rolling with NSX for them initially, but I can’t take credit for the successes they have had with it.  It’s fantastic to see that their efforts since have resulted in a referenced deployment – great work!

On VSAN a statistic was produced that 60% of respondents of a recent customer survey said that they were running business critical applications on VSAN which is a great testament to the technology.  VMware were also claiming to now be the number 1 vendor in terms of hyper converged infrastructure, I think in terms of customers?  Again a great plaudit and testament to the maturity of the product.  We were also teased with some of the features in the .next version which will focus on business continuity and DR and that future roadmaps will start to focus on data services and governance.  I’m hoping we get a bit more information at the VMworld Europe on that!

All in all some great stories over the two days keynotes and I am personally very excited for what is to come.  As a side note it was great to see some of the speaker’s personalities on show this year – VMworld keynotes can tend to be a bit ‘safe’ but it was good to see some anecdotes and humour from the likes of Pat Gelsinger and Kit Colbert.

If you are interested in the seeing the key notes and other sessions that are made publicly available, my advice is to head over the the VMworld Youtube channel and fill your boots!